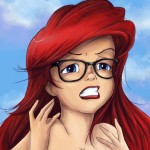 Hey, all! Sorry I missed last week’s round up. Getting prepared for the fall semester is hard enough when there’s not a pandemic raging. Also it was my birthday so goofing off was literally the only way I could think of to celebrate while in my house. Many thanks to our peeps on Discord for …

Why I’m Marching (and Organizing) for Science

The Unfettered Joy of Sharing your Art